A while a go, I read an article on a FaceBook group about a model railway that was created under the lid of a 9 drawer cupboard. The lid hinged up, buildings placed on the layout, and away it went. I have the same sort of furniture, but realised that my coffee table had a considerable height between the bottom and the lid as it had a small drawer in the middle. I thought that I could sink the railway into the space between, and that way most (if not all) of the scenery could stay in place.

N-gauge track would give me the ability to have a loop but I was thinking that N-scale would be a bit fiddly for me. I looked on ebay for some second hand N-gauge locos and bought an 0-6-0 diesel shunter to play about with.
I then came across this little steam loco. Not knowing anything about it other that it was N-gauge and “a good runner” I bought it. It is apparently a Jouef HO-Scale Narrow "Decauville" I found it to be HO-scale running on N-gauge track creating a HOe loco. I fell in love with the loco and the scale, so this is the direction I am heading.

So after some measuring up, I found some 3D mountain scans on thingiverse.com and managed to adapt (by scaling and chopping) a mountain so it would fit within the layout with the lid closed. Then by using TinkerCad.com I was able to Insert a tunnel through the mountain. Without spoiling the shape of the mountain, I had to cut the design up into 4 parts to fit on my 3D printer. Off went the printer for the next few days. Because I included some inner structure, it is a bit visible from the outside, but I’m hoping that some filler or clay skimmed over the top will hide that a bit.

With “Magic Mountain” set up in the corner, that means that there can only be single-line-working on the left of the layout, however this is room to fit in 2 passing loops before the end curve.
The first will have a turn-table mid-way (opening up access to the engineering works/sidings), the second will have a goods shed, leaving the original end curve to be the main station.

There might be an additional 3 points set into the main loop, creating short sidings at the ends of the 2 straight sections. (The mountain covers where the 4th might have been). The front 2 of these sidings might allow for a “shuttle service” DMU to operate between the 2 stations, and the third might provide for an engine shed for the main-line diesel loco. They would also enable other modular layout boards to join in on the left or right in the future.

After searching ebay a bit more, I found these small Japanese motorised chassis. Known as “TU-KOPPEL A”, they are 0-4-0 empty chassis. I love the Hunslet quarry locos, so I set about designing and 3D printing a body-shell to go on top of them. The design hides the tallest part (the motor) inside the firebox. You can see photos of the chassis and body-shell in the photos below. The body isn’t truly “to scale” as it would over-hang the chassis and make the whole thing look silly, so it is shortened. But this way there are moving parts and the loco doesn’t need a side skirt to hide the motion.

HOe scale is HO scale trains (1:87 3.5mm/ft) running on 9mm (N gauge track). This forms a narrow gauge track with similar proportions to the 2ft gauge railways found around the world and especially in the Welsh Mountains.

Someone mentioned putting a model railway inside the top of a 9 drawer chest, with the lid that opened up for access. I was looking at my coffee table and decided there was enough height between the bottom and top to install a small N gauge or Hoe mini layout with buildings 1 or maybe 2 stories high. I wanted a small mountain/tunnel, so found a 3D printer design of a mountain, and with some chopping and scaling I was able to print the mountain is 4 sections, with a height that will fit within the table with the lid down. ;-)

The layout consists of one main loop with effectively 2 passing loops. The tunnel on the left west side (3D printed!) has single line working, but with the other loops, 3 full trains can use the layout running from 1 simple DC controller.

The centre loop is also the loop to the maintenance yard. This consists of a turntable (wide enough to carry 1 loco and 1 wagon) and then feeds down to a traverser which has 4 stops along its length. Off each side there is room again for 1 loco and 1 wagon, or 2 wagons. This gives a good availability of stock to be able to manipulate on this small layout.

Something that glows in the night!

I forgot that I had the glow-in-the-dark luminous printer filament in the printer when I printed "Magic Mountain" and a few of the test carriages!

There isn't enough daylight to make them glow normally, but with a bright light on them, and then viewed in the dark, they have a ghostly appearance!

The mountain is mostly painted, but at night, the tunnel does seem to have a slight glow.

New additions for the mainline

After seeing some of these bodyshells of FaceBook groups, I fell in love with the idea, so luckily Santa delivered a couple and also the Kato 11-105 motorised chassis then ride on. The chassis is N-gauge, double bogies/pickups but single bogie drive (so 4WD, not 8WD.

Assuming that they will fit through the tunnel when the track goes down, the class 35 diesel shunter will do the heavy work on the mainline, and the class 153 Sprinter will perform a shuttle service between the East and West stations.

Described by David the designer (not me!)...
Narrow gauge 3D printed products available through Shapeways and designed by me.
Includes my popular range of 009 mainline diesel caricatures. 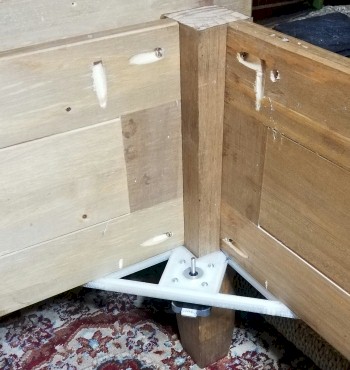 This is the second design of the bracket to hold the stepper motors for the raising mechanism. Rather than dangle off the legs, they are now supported from underneath with a triangular bracket. This not only strengthens the support for the motors, but helps the motor sit upright and also adds a bit of strength to the table.

They might be a bit over-engineered at the moment, but they will work for testing.

The sockets for the threaded rods now go into a rubber mount. Not fully convinced yet. Initial testing showed there wasn't enough current to go to all 4 motors at the same time, so I will revert back to having 1 motor driver board for each motor. This will need a little bit more wiring as I can no longer daisy-chain the motors.

Article #16 - 25/10/2021 22:36
Testing the traverser with the 4 lanes in to workshop yard.
For testing, there are no couplings yet, the wagons are being picked randomly and the pushed into the sidings.

Article #17 - 25/10/2021 22:58
A little wobbly at the moment (I think because of the flexible joints between the stepper motors and the threaded rods), but working quite well.
A limiting switch has now been added to stop the motors going too far down. (If this happens then the captive nut gets wedged against the joiner).
One isn't required at the top as the steppers count how for up the base is. This also means the base can be manually lifted beyond the threaded rods for working on the electrics on the underside.

Article #18 - 25/10/2021 23:09
Turntable for 009/HOe layout.
Controlled by Arduino style chip, the motor is stepping on a 1/16 step, giving about 9 steps per degree, so hopefully accurate enough.
Need to add a limiting switch to initialise it. Also the firmware will prevent it from turning more than 360 degrees, so the power wires won't get tangled up.

Article #21 - 25/10/2021 23:39
These couplings are great if you can get them set-up correctly.
They are American-style knuckle couplings that use magnets to uncouple them.
Under tension, the couplings stay connected going either way over the magnet, but it the tension is released slightly (by backing up a tiny bit), the magnet opens the knuckles.
In this open state, the wagon can be pushed down the siding (into place) as the knuckle is forced to stay open during this push.
Once the loco (or other wagons) mode away, the knuckle springs back to it's "ready" position to allow it to be re-coupled later. 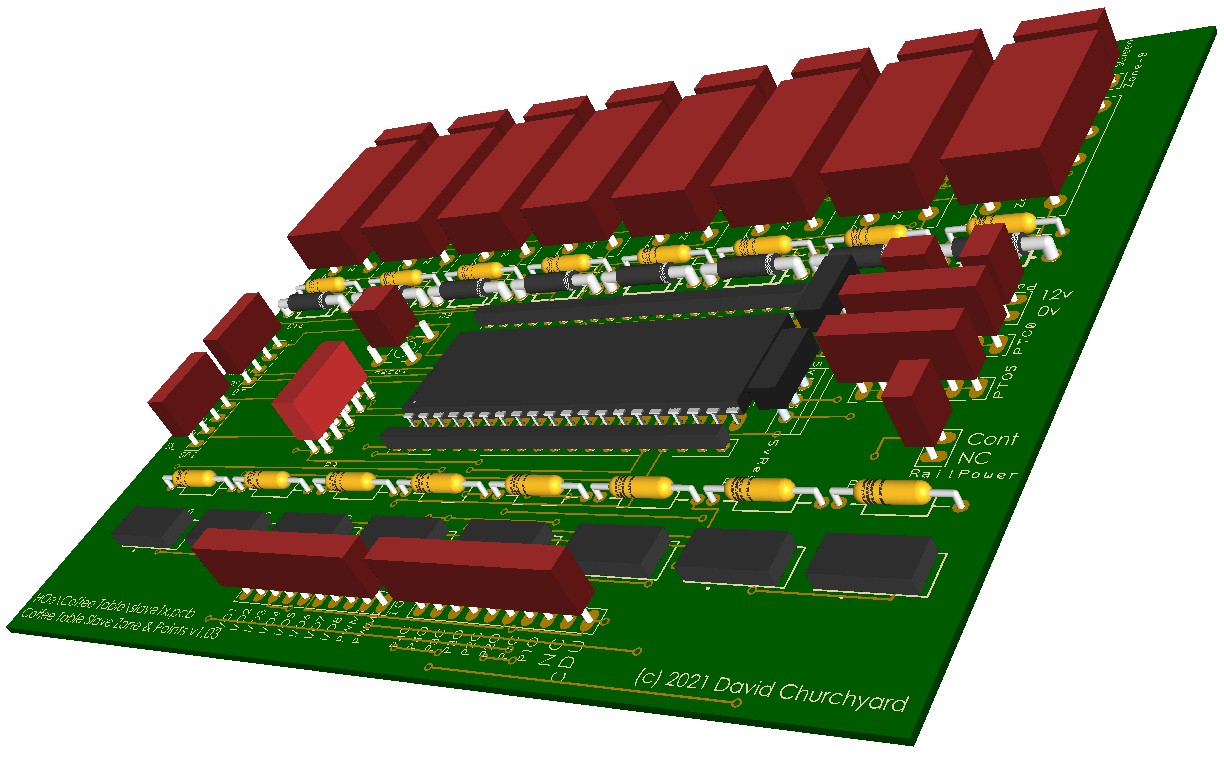 2 of these units will be required for the main loops - with another to be used for the inner areas such as the traverser & turntable.